Auke Jongbloed - ajongbloed Amongst Us!

Sometime ago, I remember when a new uploader appeared on the Concert Hall.  The name of ajongbloed "jumped out" at me, and I remember thinking, "Well, that's very clever!"  My impression was that a "young" organist had joined us, and was making a statement that here was some new, "young blood" come to give us a new take with his fine presentations of a fair amount of virtually "unknown" music, particularly, but not exclusively in the chorale prelude format. 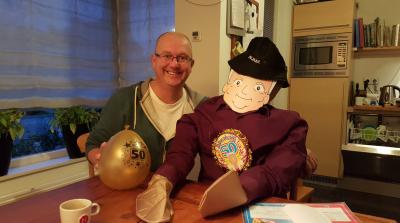 Meet our featured uploader, Auke Jongbloed at his birthday party.  A talented man at any age!

It was interesting to see that this ajongbloed started to gain listeners and followers quickly, and rightly so, as his uploads were very nicely presented.  The fact that he shared and included his research on music that was unknown to most of us was, in itself, very welcome.

However, there was still more, as ajongbloed treated us to beautifully prepared videos, which were always enhancements, and never little presentations to be "tolerated."

But there was still more!  The music that he performed was linked with his meticulous scores of the pieces that we were listening to!  We were presented not only with the pleasure of listening, but in having the opportunity to broaden our own repertoire!  What wonderful (and welcome!) gifts these scores were!

From his comment correspondence I learned, after a fair amount of time, that ajongloed was not a screen name, but that the person behind the uploads, videos, and scores was Auke Jongbloed!  While he is still quite a young man, he's not the teenager that I thought he might have been, but his performances are young and vital for any age. 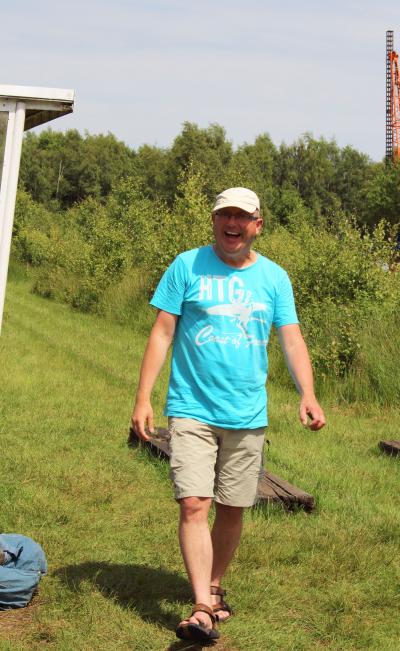 I have enjoyed all the articles that I've written about our "featured uploaders," and all of them have been very cooperative and helpful.  I have to say that Auke has really made my task very easy, since his information is SO very thorough!  All there is for me to do is to "introduce him," and add a picture here and there!  So, let's hear from our talented and thoughtful featured performer, Auke Jongbloed in his own words!

I have been fascinated by organ music as long as I can remember. As a child I moved my feet along with the bass voice of the organ music in the church, long before I knew one does actually play them by feet. My parents did not have an organ, but we did have a piano. So my musical education started

with learning to play the piano. And after 5 years or so, I finally switched to organ lessons. Having a firm piano technique certainly helps with playing the organ. But after five years of piano lessons somehow the idea that the lower staff is for the left hand is firmly rooted in my subconsciousness. Even now, 35 years later, feet and left hand sometimes disagree on who should play what. 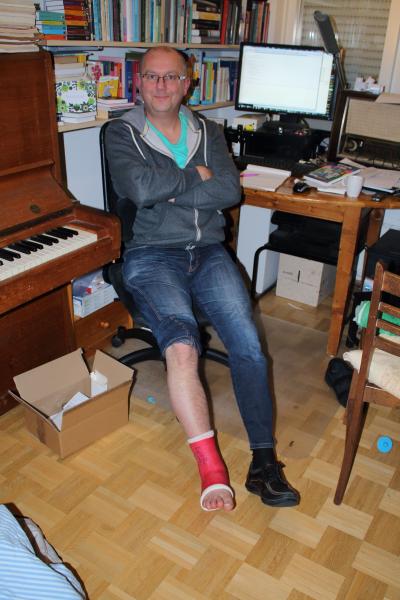 Auke was experimenting with a new pedal technique, but the experiment was not entirely successful!

Yet music did not become my
profession. Allthough I did want to go to the conservatory, I eventually
decided not to. I could have made it for the piano, because ironically, my
talent for playing the piano is bigger than the talent for organ playing.
However, I'm not really interested in piano and for organ I'm not good
enough.  I studied biochemistry instead. Interesting, but not really something
to spend the rest of your life on. After graduation I became a scientific researcher for educational theories. After having done that for a few years, I switched to the world of theatre. I helped creating stage and


theatre productions for adults, but was engaged in theatre productions for children as well. For a few productions I even wrote the music. It was really fun, but did not generate a lot of income. I decided to do what everybody did in those days: become an ICT-consultant.  I had several jobs
as ICT-consultant. Somehow I became a specialist in the energy market
regulation in the Netherlands. Nowadays I work for the representative
organization of (energy) system operators in the

Netherlands. Perhaps as far
away from music as you can get. Yet surprisingly, the guy who did (part of)
my work before me, plays the organ as well.  So, there must be some hidden
connection…


Playing organ stayed a hobby. And although I did not develop
my playing ability professionally, I did study music theory, harmony,
counterpoint, solfege and the like.  And I passed the exams for those. For
writing a fugue I even got a 9 (out of 10). Young and naive as I was, I
thought that mark overrated and pointed several mistakes out I thought I had
made. The examiners politely asked if I perhaps would prefer a 5 as mark and
fail the exam. 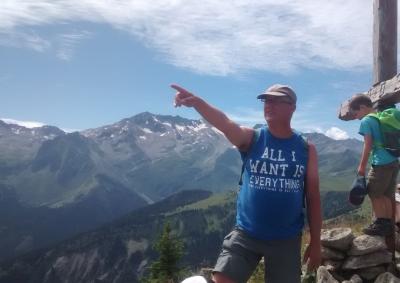 A shirt that says words that ALL organists feel!

For almost 30 years I played services in churches. I quit
doing that when our youngest was about a year old. I did not like to be away
every Sunday morning, and not be at home, doing the things you do as a young
family.  Having stopped playing services my organ playing abilities quickly
dwindled

to almost the point of not existing anymore. 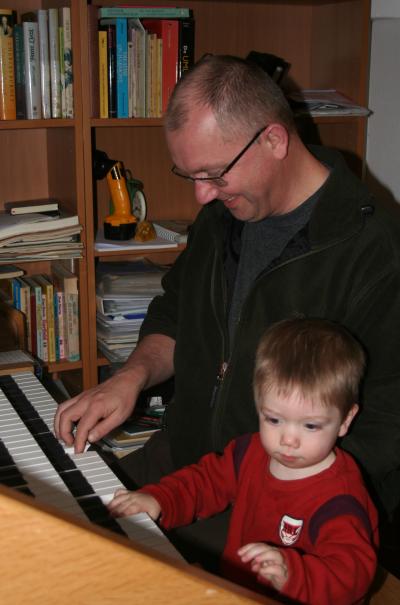 
Actually, I discovered Hauptwerk twice. The first time I did,
it looked interesting, but the computer I had at the time was not up to the
task. So it stayed 'interesting'  and not really practical. Nice to play
some carillon bells, but after 10 minutes of that the fun subsides. So I
forgot Hauptwerk.

The second time I had a far better computer. This
was two or three years ago, when I could hardly play anymore. I suddenly
remembered Hauptwerk, and tried it again. The effect was magical. I don't
have to tell you that. It worked, it was quick and responsive, and there
were some serious and free


sample sets to try out. I quickly decided that I
wanted the full edition and a 'real' sample set and started saving.  And I
started studying. Now, this was difficult. Fingers were stiff, pedal technique was virtually non-existing, and the old war between feet and left hand immediately resurfaced. My first uploads on contrebombarde are from around this time (Trio's by Sorge, me trying to remember how to play the organ).  But I continued and I regained some of the old skills. That's
when I started thinking how I could contribute something to the world of Hauptwerk, to the world of the concert hall, or even to the organ playing world at large. How could I contribute to a world where so many phenominal


players were active and created beautiful uploads?  And that's the start
of what was to become partitura.org. I was already fascinated by old
manuscripts, by computers, programs to create and typeset music (from the
'theatre years') and somehow this all came together. I decided to seek out
unknown interesting music, typeset it, and publish it on a website where
everyone who is interested can download it. Most of the music on my site is
an addition to what is available in the public domain.

And some music on my
site is even an addition to what is commercially available. I have found
unpublished music, and 'restored' some almost impossible to read music as
well. With enough time the collection can become really valuable for every
organist, I think. Future projects include

for example the "Harmonische
Seelenlust"  by Georg Friedrich Kaufmann, or the works not by Bach of the
"Neumeister Sammlung". The extra challenge for myself is: everything I
publish must have a recording of the music as well. That's to keep me
studying. 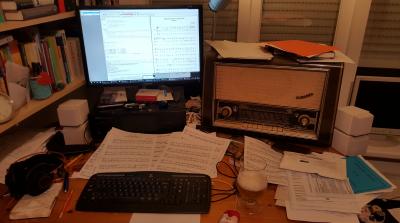 Ajongloed Central!  The place where research and much hard work gives us much new music to play and to enjoy.

A next step will be to play on a real organ again. I wonder
when that will happen. The disadvantage of Hauptwerk is that's easy to fire
up the computer and play, even if it's just for 15 minutes. Going to a
church is always more effort.  It's fascinating to have the sound of
famous organ's in ones home. There are so many sample sets avaiable nowadays
that it is difficult to choose. Three years ago I thought I would spend my
money on a large possibly French romantic organ. I eagerly anticipated a new
sample set of a new romantic organ. But partly because my publishing efforts
the old love for German baroque music rekindled. The sample sets I bought
are mainly suited for that kind of reportoire. And I am (understandebly)
interested in Dutch organs. Of course I had to have the sample set of
Haarlem. The recent sample set of the Riepp-organ in Ottobeuren is a set I
would very much like to have. But the sample set of the Lohman-organ in
Heusden is on my wishlist as well. And now OAM has announced a new sample
set of the Metzler organ in the Poblet Abbey and Hauptwerk.nl is working on
a sample set of the Batz organ in Zeist. Choices… 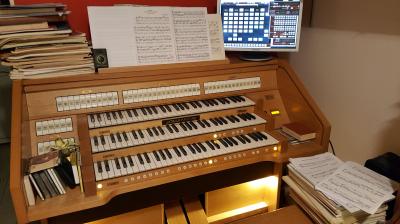 The console where Auke's fine uploads are performed.

And if that were the
only choice to make… My sound installation is far from perfect. I still use
the internal sound card of my computer, amplifier and speakers could be
better, my three manual Johannus console could be replaced by a four manual
console with wooden keuboards, and while we're at it, this should all be set
up in a larger room than I have now, so I need a bigger house… 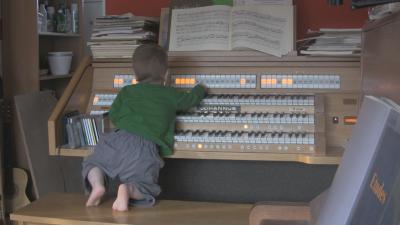 Auke's son is seen here confirming the fact that lighted stop tabs are a MUST have!

On the
Dutch Hauptwerk-form there are a lot of discussions about potential enhancements of Hauptwerk. A lot of it is quite technical and most of it I do not understand properly. But two discussions are very interesting. The first one discusses ways to ensure the sound from rear speakers reaches the playing position at the same time as the sound from front speakers. The second one discusses recent development of 6-channel sample sets: is it a enhancement of not?  I think the future will be a return to 4-channel
sample sets, without variable listener position, but with the ability to
adjust front and rear channels to match the playing position, making the
sound from both arrive at the same time at the playing position, thus
enhancing the experience of the church where the were recorded.


At
least it is the dream for my own Hauptwerk setup: four high quality speakers, room for good placement of those four speakers, timing of rear and front channels adjusted to match the playing position, and correction of all room acoustic interference. Oh, and that four manual
console.

But it'll be quite a few years before I have that… 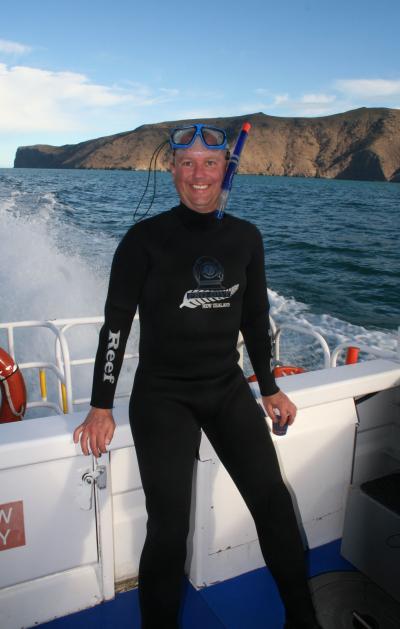 Auke Jongbloed - a good man, with talent, diligence, and a willingness to share with others.

So there you have a small picture of Auke!  I'm always interested to learn more about my fellow uploaders, and I'm grateful to Auke for sharing information about himself, his family, his ideas about Hauptwerk, and a few of his plans for the future.

If you haven't listened to agongbloed's uploads, you really must!  You'll enjoy them, and if you are interested in expanding your own repertoire, you'll often a meticulously researched and prepared new edition waiting for you.  At the time of my writing this, Auke has some 327 uploads to choose from, so there is something that will appeal to just about everyone!  When you do listen, please take a minute to thank him for all the work that he so willingly shares with the rest of us!

Subscribe to get the latest articles and updates!
Featured